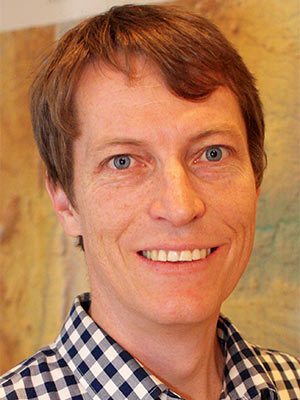 Prof. Daniel Feezell is currently an Optical Science & Engineering Professor at the University of New Mexico. Prior to UNM, he was a Project Scientist in the Solid-State Lighting and Energy Center at the University of California Santa Barbara and a Senior Device Scientist at Kaai/Soraa, Inc., where he developed high-performance GaN-based laser diodes and LEDs. He has also published a GaN VCSEL review in Compound Semiconductor Magazine titled The Evolving GaN VCSEL.

I understand you work extensively with gallium nitride (GaN).

Yes, that's correct. My group works on semiconductor-based optoelectronics and electronics. To provide a little more granularity, we work on a wide-bandgap semiconductor material called gallium nitride, as you mentioned. We've worked on a variety of projects throughout the years, focused primarily on optoelectronics — devices like LEDs and vertical-cavity surface-emitting lasers or VCSELs. We've also done a little bit of work in the electronic space, looking at vertical power electronic devices, as well.

We do work on the growth of gallium nitride-based materials, their processing and characterization.

What do you mean by the growth of gallium nitride?

We do what's called epitaxial growth, it's essentially growing high quality layers of materials that are used for certain functionalities and devices. For example, one method we use is metal-organic chemical vapor deposition (MOCVD). In the MOCVD a variety of precursor gases are introduced into a chamber. We carefully control the pressure and temperature within that chamber and are able to deposit thin layers of different alloys of semiconductors. By controlling the thicknesses and the alloy compositions of those semiconductors, we can change the functionality of those devices. This is called band gap engineering.

Why choose gallium nitride as opposed to silicon?

More plainly, gallium nitride and its alloys --aluminum GaN (AlGaN) and indium GaN (InGaN)--can be used to create optoelectronic materials and devices that can emit light that spans all the way from the ultraviolet (UV) wavelengths to the visible wavelengths. Gallium nitride and its alloys are the workhorse materials for making things like UV LEDs or visible LEDs (i.e, blue or green regions of the spectrum).

But not just LEDs, gallium nitride's been used for solid state lasers to access blue wavelengths like 405 nm where you can do data storage and other photonic type applications.

In terms of electronic devices, the wide-bandgap of gallium nitride is very important for switch very large voltages and having strong temperature stability in terms of operation. This has great potential for energy savings.

You mentioned photonics applications. I'm curious what might be some familiar applications of that?

The most familiar and biggest applications for gallium nitride, in the optoelectronic space, are solid-state lighting--the use of LEDs to produce white light and white light bulbs. Other applications that I mentioned are data storage using lasers to read and write information. Another well-known applications for gallium nitride-based devices is in displays. You probably have an LED based television or monitor. LEDs are getting smaller and now micro-LED devices are being used to make unique displays in watches as well as the growing applications in AR and VR displays. Several companies are working on those technologies. There are some of niche applications that are related to gallium nitride-based lasers being used in certain types of atomic clocks these can help with GPS.

Great. When it comes to your lab, do you do any work with plasma processing technology?

Yeah, we certainly do. I work at The Center for High Technology Materials (CHTM) at the University of New Mexico, we actually have two plasma etching systems. We have one system that is primarily for chlorine-based gases and another one primarily for fluorine-based gases. We use those systems quite frequently. Not just in my research but center-wide. We use them for etching a variety of materials, not only for III-V semiconductor materials and GaN-based materials, but dielectrics and silicon as well.

We commonly use those etchers to make structures that one would typically see in an LED, for example a mesa to define the device boundary or make contacts to a specific layer, or a waveguide structure like a ridge, that one would typically see in a solid state edge emitting laser. But we also use the plasma systems to etch features needed for power electronic devices. So, we very commonly use plasma etch processes.

For a more in-depth example, what's one application, in particular, you've used the etching technology for recently?

Let's use the example of forming micro-LEDs. If you want to make a micro-LED or any LED for that matter, an LED is composed of a PN junction, and within the PN junction you have what is called an active region. The active region emits light when you inject electrons and holes into it. In order to make an LED, you have to form electrodes on both sides of the PN junctions, so you need both a cathode and an anode.

To access N junction material, you have to etch through the P-side of the material, and doing so we form what's called a mesa. That mesa is just a portion of that wafer that has been etched, leaving the original portion of the wafer in place. We pattern the wafer using photolithography, and then we will use the patterned photoresist or patterned dielectric material to function as an etch mask so we can etch away material where the mask doesn't exist, and we can create these mesa structures.

Can you explain a little more on what a mesa structure is?

A mesa structure is just a raised pedestal, essentially, in the semiconductor. Another way to think about it is its purpose of the semiconductor and everything around a certain area has been recessed by an etching process. At the end of the day, your wafer would have an array of raised pedestals on it. They're not really raised, the top is at the original height of the wafer and the rest has been recessed down.

Another more intuitive example would be in making diode lasers. Diode lasers often have a ridge structure--something that looks like a ridge--and that ridge structure is used to more efficiently guide the light. And those ridge structures are pretty much always formed by an etch process using an ICP system.

Etching waveguides, mesas, dielectrics are just a few examples of how we use Inductively Coupled Plasma in our particular types of devices.

Sounds like an exciting application of plasma processing technology. Thanks for taking the time to talk.

It was no problem. You're welcome.