How to Determine Throughput

What is the throughput of a plasma processing system? When buying a system, it’s important to know whether the level of output is suitable to fulfill the user’s capacity needs. For example, some customers are interested in how many wafers per hour can be run while others are asking how many chambers are needed to satisfy a quota of devices (units) in a month. Multiple factors go into calculating throughput.

As the need for high throughput increases, the level of automation required increases as well. In R&D environments, throughput is usually not as much of a concern. They tend to favor manual open load or manual load lock systems. There are still some production models that strongly rely on manual operations. These systems are usually operated in a batch mode where many wafers can be processed simultaneous.

Table 1 shows some of the key features, advantages and disadvantages of the different handling options. 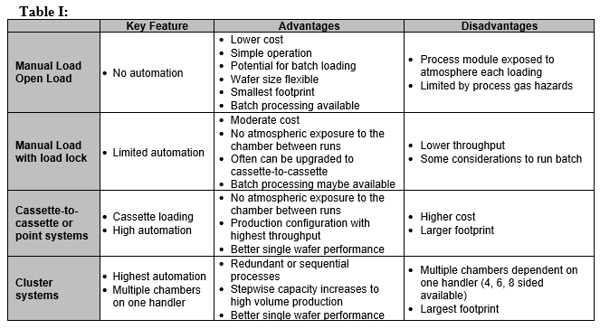 Throughput can measured in many ways. For simplicity, assume a fully automated system where the operator loads and unloads a cassette and the system does the rest. The following factors will apply:

So, when asking for “average” throughput, it is not easy to answer without knowing what factors to include. The details matter. Things get really complicated when there are multiple chambers on a single handler. Other complications arise when there are cooling stations involved. Depending on the process times, scheduling the robot becomes complex.

Batch processing often is considered when the wafer or substrates are small compared to the 200 mm and 300 formats found in mainstream silicon production. There are many applications that rely on substrates that for a variety of reasons are limited to 150 mm and smaller. A few examples are indium phosphide for optotelecommuncations, lithium niobate, and lithium tantalite wafers for RF filters. It is only recently that sapphire substrates for gallium nitride LEDS and gallium arsenide for RF power amplifiers have transitioned to 150mm wafers

When white LED use began its rapid grown, the sapphire substrates were at 50 mm. To reduce production costs and avoid processing one wafer at a time, the production model looked at operators loading pallets of wafers that would sometime exceed 40 wafers per process run. The challenge becomes how to achieve the requisite performance (primarily uniformity) with such large batches. Systems grew in size and the economics are such that these systems are still in production today but with 100 mm and 150 mm wafers. Due to limitations in chamber sizes, most high volume production is done with process modules designed to deliver high performance with single wafer loading.

Finding throughput depends on clearly outlining the assumptions that will be used in the calculation. The result of this calculation is used as one of the inputs when determining the cost-of-ownership of a system. In another blog we will discuss cost-of ownership that considers how one calculates that important parameter.