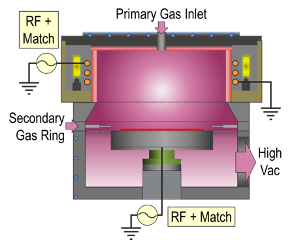 HDP-CVD — a chemical vapor deposition tool that utilizes an Inductively Coupled Plasma (ICP) source — is an increasingly popular plasma deposition tool. HDP-CVD (also known as ICP-CVD) is capable of generating higher plasma density, and quality films at lower deposition temperatures than traditional PECVD machines. In addition, HDP-CVD provides nearly independent control of ion flux and energy, increasing trench or hole-fill capability. But, another distinct advantage of the HDP-CVD configuration is that it can be converted into an ICP-RIE for plasma etching use. This may be very useful in cases where there are budget or system footprint constraints discouraging dedicated systems.

That may sound strange on the surface. But both types of processes can run on the same system. There are a few internal differences such as an additional gas inlet, but the core build of both machines is nearly identical. So, if you own a CORIAL, Advanced Vacuum, or Plasma-Therm HDP-CVD system and you need to utilize an RIE for etching, you can follow these steps to rapidly set up your equipment to perform etching.

This process is so simple that you can turn your HDP-CVD into an ICP-RIE in around 30 minutes (with some limitations).

In only three steps — one process, one hardware and one software— your HDP-CVD can be converted into an ICP-RIE. However, it's important to read the limitations sections further down in this post. This may not be an ideal long-term solution, and it's wise to invest in dedicated ICP-RIE equipment for the most suitable operation.

Before converting a chamber a clean process should be run to remove materials that were previously deposited or residual adsorbed gases. The deposited materials are typically silane-based such as Si, SiO2, SiNx, SiC but maybe other materials such as diamond-like carbon or fluorocarbon polymers. They should be removed as they may affect the etching process. For example, if the previous runs were SiNx, then a cleaning process that uses fluorine can be run using SF6 or CF4. Similarly, etch gases might need to be cleaned away prior to running a deposition process. Cleaning time is dependent on the material, the amount of previously deposited films, and the sensitivity of the application chamber conditions. More on this in the limitations section.

HDP-CVD equipment has two gas inlets: One at the top of the chamber and one connected to a gas delivery ring near the wafer. The top inlet is for reactant gases such as N2, O2, Ar (and cleaning gases such as SF6 or CF4) while the gas delivery ring is reserved for distributing highly reactive deposition precursors such as silane (SiF4) near the wafer. Nozzles on the gas ring are used to efficiently supply the deposition precursor(s) to the wafer and ensure uniform films. In an etching mode, ions may hit these nozzles and sputter contaminants.

Once the hardware change is complete one needs to make minor changes in the software configuration to accommodate running etching recipes. The recipes select the RF power levels, operating pressure, gas flows, and electrode temperature.

Etching and deposition although fundamentally similar in hardware and plasma processes can provide very different results. There are instances where simply changing process conditions such as the partial pressure of input gases can result in a shift between etching and deposition. Mentioned earlier, contamination can easily happen when switching between modes. When switching from deposition to etching, incomplete cleaning of the chamber may result in residual deposition material that affects the etch process. For example, if there is silicon material remaining after a cleaning and the goal is to use a fluorine process to etch silicon on a wafer, the excess silicon in the chamber can consume fluorine. Process results would likely change as the previously deposited silicon on chamber surfaces is removed during the wafer etching. This might or might not be an issue depending on the requirement of the process.

An example limitation when converting from etching mode to deposition processes is when fluorocarbons are used to etch and fluorocarbon polymers residues have been left on chamber surfaces following cleaning. As the chamber heats up during a deposition process, those fluorocarbons are desorbed and released into the chamber, potentially (and likely) contaminating the material being deposited. Again, this may or may not be an issue depending on the amount of residual polymer and the purpose of the films being deposited.

A third example is when etch chemistry is not fluorine based. In the case of using chlorine based etching gases there is a possibility that with inadequate cleaning, chlorine will contaminate a deposited film. Other examples include applications that may be very sensitive to fluorine such as etching GaAs and AlGaAs layers.

There are many different examples of cross-project contamination that can occur as a result of switching between plasma equipment modes. There are many combinations of gases for etching and many for deposition. This makes awareness of chamber conditions, understanding application requirements, and developing appropriate cleaning procedures very important.

Transforming an HDP-CVD into an ICP-RIE is relatively simple. The actual hardware change can be as little as 30 minutes not including cleaning, pump down to base pressure. The complexity is introduced during the cleaning between process modes. You may have to manually clean the chamber each time you change modes. Other situations may only require plasma cleaning with conditioning processes.

The overall amount of care you need to put into cleaning and chamber preparation varies based on application sensitivity. If you're depositing non-critical components s such as hard mask layers that will be removed later, small impurities may not make a difference. But, if the deposition layer is application-critical such as gate insulator or part of a capacitor, detailed understanding of the risks and cleaning requirements is needed.

To many, being able to rapidly transform an HDP-CVD into an ICP-RIE in a short time may come as a surprise. But the equipment is the same; only slight modifications are necessary. To learn more about HDP-CVD, download our whitepaper comparing and contrasting HDP-CVD, PECVD, and LPCVD.