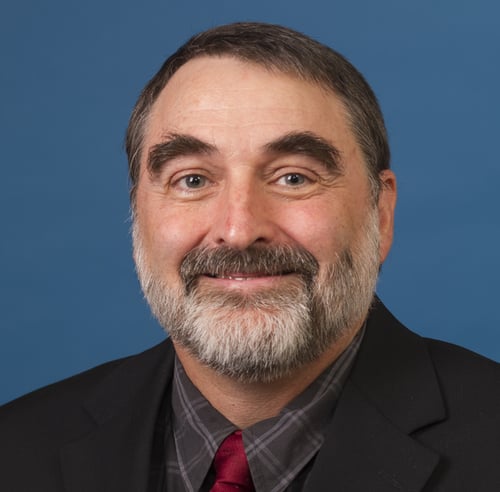 Gregory Snider, Ph.D., is a professor and chair of the Electrical Engineering Department at the University of Notre Dame. Over the past few years, his research has focused on the design, fabrication, and measurements of micro- and nanoelectronic devices.

We sat with Prof. Snider to learn more about his current research in the area of Low Energy Computation and how plasma processing contributes to some of the results.

Interviewer: I'd like to hear a bit about the current research you're doing.

Dr. Snider: I'm interested in devices and circuits that can do computation at extremely low energies. For instance, I've spent many years working on nanoelectronic devices where we're manipulating single electrons. The idea being that you encode information on a single electron, so that if it's over here, it's a zero. If it's over here, it's a one, and then you can switch it between the two. This is somewhat different from quantum computing, but there's a lot of commonalities. Quantum computing is actually harder.

Interviewer: Is there going to be an impact of your work on quantum computing do you think?

Dr. Snider: We do a little quantum computing, and we're collaborating on a project where we're looking at quantum dots that are grown by molecular beam epitaxy or MBE. We use plasma tools to deposit a growth masking material and etch holes in it. The holes are where these quantum dots will be grown. The idea is that if you put some electrons in the quantum dots, with the right material and the right configuration, they create what are called composite fermions. If you do this in the right way, you can create Marjorana fermions, which are topologically protected states that can be used for quantum computing.

One of the things that I propose is that the work that we do on low power computation makes it easier to put more electronics down at the cold level, rather than at room temperature because modern microprocessors produce a lot of heat. You know that your laptop can burn your lap. Processors can dissipate a hundred Watts. The entire cooling power of a really, really good dilution refrigerator for quantum computing stuff is a few milliwatts at 10 millikelvin. So you can't currently run a microprocessor at those low temperatures.

If you can do a computing approach that uses a lot less energy, you can do more computation, more signal processing, more everything else at low temperatures, and have fewer wires crossing to room temperature. That's where my work primarily impacts quantum computing.

Interviewer: What are applications for your research?

What the approach that I'm using does is it recycles the energy inside the microprocessor. What we do in our processor is to separate the ones in the zeroes. A zero is one type of energy, and a one is a different configuration of energy. We go over to the bucket that holds ones, we take one out, and we use it. And when we're done with it, instead of throwing the energy to heat, like a normal processor does, we put it back in the one bucket. We need a zero, we get it out of the zero bucket.

The issue though, is that keeping track of which bucket I used to get this bit of information, whether you got it from that bucket or that bucket requires some overhead, and that's called reversible logic. That overhead keeps track of where you got your bits of information, so that you can take the energy out of the bucket and put it back in the proper bucket with very little loss to heat.

Interviewer: It sounds like this would be a very good way to save energy.

Dr. Snider: Yes, especially if you have a constrained energy source that you're using to drive your electronics. For instance, our project is being funded by the Air Force because they're interested in satellites, and satellites have a constrained energy source, the solar panels. If they can cut down on the amount of energy used in their electronics, they can either do more processing with the same amount of energy, or they can do the same amount of processing with less energy. And so they require fewer solar cells and the satellite gets lighter, and that's better.

Interviewer: You mentioned a little earlier overhead from reversible logic. In what sense is it overhead?

Dr. Snider: There are two ways you can handle the overhead in terms of reversible logic. One is that you have additional logic. Instead of just having a circuit that does some function, you have to essentially add a watchdog circuit that keeps track of whether you took your bits out of the zero bucket or the one bucket. When you're done, you essentially run it backwards and return the bits. That's one way to think about it and another reason you call it reversible; you put the bits back in their respective buckets.

Another way to do it is not with additional circuitry, but essentially create overhead in time. In that case, you essentially run the circuit forward and then run it back. The way to think of that is that your power supplies and your inputs and your clocks do work on the circuit when you're going forward. And then your circuit does work on the clock and the power supplies when it's running backwards. So, you put the energy back where it came from. Of course, nothing is ever for free. The efficiency at which you transfer this energy determines what your fundamental level of dissipation is. If you have better devices that can move the energy more efficiently, that's good.

Traditional devices like transistors are kind of inefficient. So we're looking at other devices that might be more efficient at moving around the energy.

Interviewer: One last part I'd like to get into. You briefly mentioned that etching was involved in the process. I was hoping you could maybe go into a little about how plasma is used.

Dr. Snider: My students and I do a lot of processing of devices; we also design devices, test devices, and circuits. So we spend a lot of time in the fabrication lab. In fabrication processes, over the last 30-35 years, the transition has been made to do as much with dry processing and plasmas as possible. There is still wet etching that gets done in wet processing, but anything that you can do dry, you do dry.

For instance, in the quantum dot project, we use plasma twice for just our part of the project, and that is when we're making the templates. One disadvantage that plasmas have is that because they involve energetic particles, they can do damage to the underlying semiconductor, so we have to be careful when we do plasma etching techniques such as RIE or ICPRIE. Most of our dielectric layers are deposited by either plasma enhanced, or low pressure, chemical vapor deposition, so they're not all plasma-based, but we do a lot of plasma deposition, and a lot of dry etching.

Interviewer: Okay, that was extremely interesting. Thank you for helping us understand more about how single electrons might be used in new methods of computing. It was nice meeting you.

Dr. Snider: Nice meeting you, too.