At CORIAL, we pride ourselves on hiring the best people so that we can do the best work for our clients. It's important to us that we highlight those that go above and beyond in their roles so that you can get to know them too! Every month we'll be featuring a new employee who has exhibited our core values and contributed to the success of our clients.

This month we are excited to introduce...

Dr. David Lishan has worked for Plasma-Therm as a Principal Scientist for nearly 23 years now. His journey started with Honeywell (formerly Allied) as a chemist and led to him going back to graduate school for electrical engineering.  There, he focused on processing and, in particular, plasma etching. He then worked for a PVD company, Sputtered Films, which developed the Endeavor, a product now in the Plasma-Therm product portfolio (in the semiconductor equipment circle, paths often cross). While at Sputtered Films he spent a year at IBM in Vermont working on Next Generation Lithography (NGL) technology

While there are several parts of the job he enjoys, being able to apply the broad background he has to discuss customer problems and come up with solutions is among the top.  Since Plasma-Therm engages in many markets, he also gets to interact with many different types of technologies, learning about new R&D in the process. The variety of projects keeps it very interesting.  Our customers span the globe and, through travel, he has also had the pleasure to engage with diverse cultures. Though at times he is in perpetual jet lag, travel has broadened his thoughts and has been thoroughly enjoyable.

As he gets closer to the end of his career (not there yet!), he has had the chance to mentor more and has found that a nice change. "It's amazing, but I've learned through experience just how small the world is," Dr. David Lishan explains. "Many times the degree of separation is only one or two connections.  I've met people halfway around the world that were office mates with colleagues I shared an office within graduate school."

Dr. Lishan finds himself lucky to be in a role where he gets to use his broad background in chemistry, electrical engineering, and solid-state physics.  As a principal scientist, he often gets to be an educator both internally and externally. Plasma-Therm has sponsored nearly 50 workshops at leading universities throughout the world on plasma processing.  The response to these workshops has been very positive and has led to many opportunities to work with graduate students and customers assisting in their research efforts.  Recently, he was asked to participate with a research group at Cornell on a project (Cornell has both many of our old and newer systems).  One of the students is moving to Georgia Tech into the same group where we are now in discussions for a new system. Small world.

At this point in his career he is involved with various organizations such as the SPIE, IEEE, and the American Vacuum Society and helps with conferences by being on program technical committees. Recently he is working with a SEMI working group on MEMS to collaboration on a guide for developing MEMS technology from first idea to high volume production. 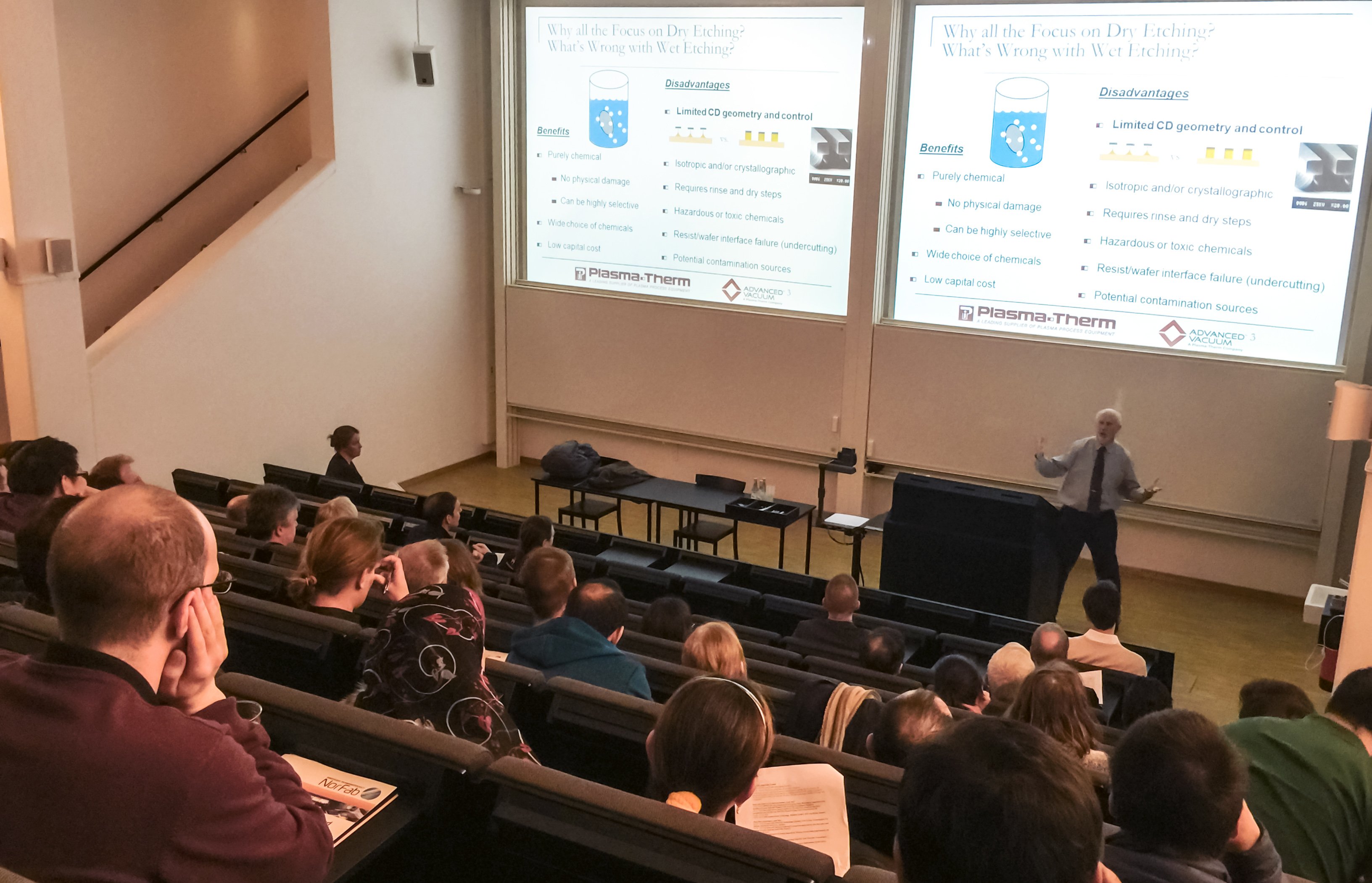 Outside of work, Dr. Lishan makes it a point to take a long walk every evening, and the weekends are filled with DIY projects.  During the latest project he learned how to use a jackhammer and how to lay a new paver walkway.  He has also participates on the board of the Mattie Williams Neighborhood Family Center in Safety Harbor.

His motivation is in the satisfaction of helping others understand technology or contribute to a customer or student's success.  Those that know him know how quickly he can lapse into teaching mode.

While he jokes that "air" is the one thing he cannot live without, he considers the question to be difficult to answer. "Humans have an incredible capability to survive," he explains. "Take something away we think we cannot live without, and somehow we continue. As for everyone, the pandemic has brought big changes and challenges. This is the longest I’ve been in one place for nearly 20 years."

When asked who it would be if he could meet one person, living or dead, Dr. Lishan found the question to be very provocative again. "There are many I would like to have a one-on-one with.  Not all of them would be pleasant conversations. For some,  I would like to know why, as an influencer, they chose to influence in the way they did.  Other conversations would be to learn how they overcame obstacles and maintain optimism.  The list is long.  I think I'd like to talk with the French philosopher Voltaire (one of the first one-name rock stars).  His wit and the social issues that he championed would make an interesting conversation.  It would also be great to talk to Leonardo da Vinci and Shakespeare.  Too many to name."

In light of other things he would like the share, Dr. Lishan added, "The last several years I've tried to learn a bit of Mandarin.  It is difficult tonal language, and I don’t have a very good ear for it as much as I try. Perhaps a shock to many that know me, but I almost gave up on science in my late 20s to pursue my serious hobby as a ballet dancer at a regional level company."

"Never in my wildest dreams did I ever imagine that I would have a career that involved a significant amount of public speaking," he continues. "The idea of presenting to groups was terrifying.  I took a teaching position for a few semesters to intentionally get over my dread, and it ended up working. It has been very rewarding. One of my most fulfilling and successful roles at Plasma-Therm was being the project manager for the plasma dicing project and closely working with the customer to sell the very first one."

Don't miss out on the next employee spotlight and other educational articles written for business leaders like you by subscribing to our blog.