Diamonds and Beyond 5G: A Conversation with Prof. Srabanti Chowdhury 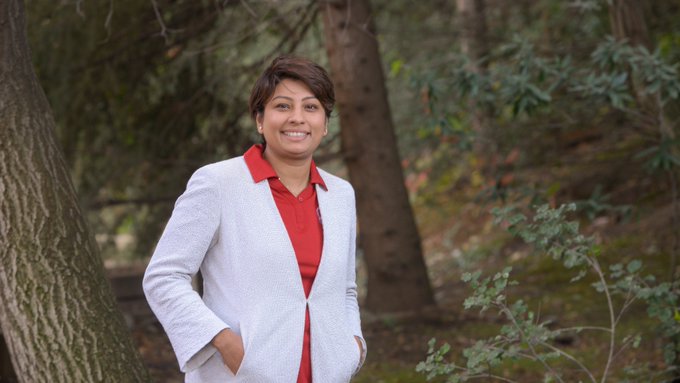 Srabanti Chowdhury, PhD., is an Associate Professor of Electrical Engineering at Stanford University. She received the DARPA Young Faculty Award, NSF CAREER and AFOSR Young Investigator Program (YIP) in 2015. In 2016, she received the Young Scientist award at the International Symposium on Compound Semiconductors (ISCS).  We interviewed Prof. Chowdhury to discuss her research on wide bandgap materials and energy efficient device engineering.

Interviewer: Hi Prof. Chowdhury, what has your recent research focused on?

Chowdhury: My work is on wide-bandgap materials - an emerging class of semiconductors known for power-efficient applications and power-efficient devices. The demand for electricity has grown incredibly since the 1970s when silicon manufacturing technology enabled low cost electronics. Along with the need to generate more power has come the increased requirements for power management and power conversion.

Power conversion is basically hidden in all gadgets that you see around. There is always a little power conversion going on from the line voltage to maybe a different frequency or from AC to DC; all of these are happening all the time. We're focusing on the materials that will become extremely important to keep providing higher and higher power efficiency as we become more and more electronics dependent.

These wide-bandgap semiconductors have certain material properties that are better than silicon, and there is work to improve them even more. That's what we are focusing on. We are trying to get up to, let's say, 1,000 times improvement. These are orders of magnitude better performance than what we currently have.

Interviewer: You mentioned that for power applications, wide bandgap materials are better than silicon. What is the main reason that silicon isn't up to par?

Chowdhury: Silicon comes with a bandgap, which is around 1.14 electron volts - this is an important metric we use. The best analogy of relating to a bandgap in a very tangible way is light. If you think about blue light, you are actually talking about maybe 300 to 450 nanometers wavelength. You can relate that wavelength to the energy of a semiconductor's bandgap.

To give a more specific example, silicon cannot produce any light on its own. There are certain things that you can do to silicon for scientific research, but it's not technologically viable to produce light out of silicon. But if you think about silicon, the bandgap is 1.1, which is not in the visible range of light, and if you think about wide bandgap material, their wavelengths are in the visible domain of light. That means you're talking about blue or green wavelengths - the bandgap corresponds to that shorter and higher energy wavelength.

Why is it better? This bandgap is the key. When you have those kinds of bandgaps, which are higher energetically from silicon, they come with a very interesting property called critical electric field.

The best way of understanding electric fields is: how much voltage for a given thickness of a semiconductor can you apply before the material gives up, or before it yields. That number for gallium nitride, or the wide bandgap materials that I'm talking about, can be 10 times more than silicon. That means that if one micrometer of a material in Silicon can hold back 30 volts, then one micrometer of this wide bandgap material can give you 10 times more voltage for the same amount of material.

Interviewer: You mentioned gallium. Is that one of the elements that are in these wide bandgaps?

Chowdhury: Yes. Gallium nitride is made up of gallium and nitrogen, and this is actually the famous blue LED material which got the Nobel Prize in 2014. In 2014, three very prominent researchers were awarded the Nobel Prize because of their work which enabled white light. Up to that point, blue light emission was the missing component. You had red, and they were trying to get green, but blue was impossible without a breakthrough in the material. Gallium nitride happens to be the same material which actually gave the appropriate bandgap to make a blue LED. The next step was to use that blue light to make white light LEDs. In a sense this is also energy management, blue light is converted into the wavelengths that make white light. So gallium is one of the elements that goes into this material and the other one is nitrogen.

Interviewer: Now that we have a bit of an overview, would you mind going into some specifics of what you're investigating?

Chowdhury: My work has been in three main domains. One is power electronics, which is producing higher efficiency electronics for future electrification and power savings. The second research area is high-frequency electronics which are used for 5G and up. As you know, there's a lot of buzz going on around 5G, whether we are prepared or not. Our infrastructure and our electronics have to be 5G compatible. To be honest, very soon we will be beyond 5G. We are already talking about things like 10G. So in terms of the device research, we have to always think at least 10 years ahead of the curve from where we are. Ten years is a very small time frame for device or material research because by the time things get deployed and things are commercialized, we are on to the next thing.

The third domain is fundamental or basic research. We are looking into solving some fundamental science issues that are extremely important to enable the technology.

Interviewer: Let's say that we had instead of 5G we were at the point of using 10G. What would be enabled? How would 10G change how we use electronics?

Chowdhury: We are not using a lot of the spectrums in terms of the frequency spectrum that is available for us to communicate. 5G enables us to use more of that spectrum at the higher frequencies. This conceptual “10G” would allow us to use even higher frequencies and pack the frequencies or channels closer together. It is a challenge to generate high frequencies and have the precision to keep the frequencies separated. Whenever you're looking for more precision in communication, it comes with the demand of more energy concentrated in a given element. When I say element, I'm not talking about fundamental elements of a periodic table, but elements in an antenna that receives or transmits.

If you want to make a very focused beam from that antenna, then you have to have each of the critical elements be able to produce more energy. Energy density is key to precise communication. We're still pretty far away from seeing the full rollout, but very soon, point-to-point communication will be even more important.

When you are talking about point-to-point communication, and you're talking about communicating through various buildings, through different kinds of weather, you would need more energy per element, and that's where some of the research is going: How do we make the elements more power dense so that signals they can cut through fog, or can cut through other kinds of harsh environmental situations.

We are trying to move to higher and higher frequencies. Right now, communication is not even close to a hundred gigahertz. In research we developing elements that operate at a frequency of one terahertz, because if we can do things in the terahertz regime, then we get room for systems which can go to hundreds of gigahertz.

Interviewer: How does plasma etching play into your research when it comes to trying to advance wide bandgap?

Chowdhury: What we call devices are basically electronic components that go into integrated circuits for computation, memory, or power management. As mentioned, the wide bandgap materials are core to power management devices. These materials with different properties than silicon present processing challenges – especially etching.

As the wide bandgap materials are a relatively new compared to silicon, the etch technology is not as developed. Although there is definitely some transferable knowledge from what we have learned from years of etching silicon devices, we cannot simply apply silicon etching technology to the wide bandgap materials. Although we have come a long way, expectations are growing and with more widespread adoption of this technology, both in research and development, it is becoming, extremely important to understand both the physics and chemistry behind the etching. We are learning how plasma interacts with these materials to optimize device structures, such as making smaller and higher aspect ratio structures and taking full advantage of these important materials. So that's where plasma etching plays a new crucial role.

Also, we are talking about aspect ratio, which basically suggests how small each dimension of these devices could be. The demand of a high aspect ratio design plus the challenge of a new material makes plasma etching a very crucial technology for this kind of research.

Interviewer: Do you think that diamond could be a commercially produced wide bandgap material?

Chowdhury: Absolutely. Diamond has a bandgap five times that of silicon and is an excellent thermal conductor, making it an attractive material for higher voltages and power densities. It is not the easiest material to acquire to use as a semiconductor but there is good progress in growing it. I personally think that if there is enough research in the next five to six years, then it should have a successful commercial path.

Interviewer: That was fascinating. I really enjoy hearing about your research. It definitely seems like it's going to be the future and have a large impact on technology.